As part of our annual YWRC Gala celebration, we honor community members who strive to empower girls and women throughout Greater Des Moines with the Louise Rosenfield Noun Impact, Purpose, and Visionary Awards. The Impact awardees are nominated and selected by YWRC staff. The Purpose awardee is selected by the YWRC Executive Director. The Visionary awardees are nominated by community members and are selected via a vote by the YWRC Gala committee.

All 2023 Louise Rosenfield Noun Awardees will be honored at the YWRC Gala: Cultivating the Future event on Saturday, April 1, 2023 at Hilton Des Moines Downtown in Des Moines, IA.

The Louise Rosenfield Noun Impact Award honors a Greater Des Moines community member for the significant contributions they have made toward the empowering of girls and young women through direct service, programming and/or mentorship. This person identifies areas of inequity and seeks collaboration to build solutions ensuring rights, opportunities and choice for marginalized populations. They strive towards gender equity, inspire others to join them in their cause, and have a direct positive impact for the community we serve. The Impact awardee is nominated by YWRC staff members.

The tradition of the Impact Award began in 2021. Previous awardees include Dr. Barbara Adams and Sydney Moore.

The Louise Rosenfield Noun Purpose Award is presented to an individual or family with a record of exceptional commitment to Young Women’s Resource Center through volunteer leadership and/or direct financial support. This award recognizes leaders who give, advocate, and volunteer for positive change to advance the opportunities for girls and young women in the community.

2023 marks the inaugural year for the Louise Rosenfield Noun Purpose Award. The Purpose Award will be presented by YWRC Director Kari Zimmerman.

The Louise Rosenfield Noun Visionary Award honors advocates, activists, innovators, and philanthropists who have made significant contributions towards empowering girls and young women. Their work advances the status and welfare of girls and women, and their investments have a ripple effect to inspire others in the community. This individual’s efforts are exemplified by their passionate belief in the purpose of empowerment, their vision for the future, and strong sense of values guiding their work.

Award criteria, factors for consideration, and nomination guidelines are found on the nomination form. (Nominations for the 2023 Louise Rosenfield Noun Visionary Award have CLOSED.)

ABOUT LOUISE ROSENFIELD NOUN AND THE YWRC 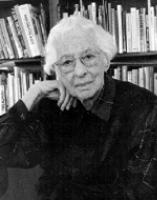 In 1978, a group of visionary women, led by feminist and philanthropist Louise Rosenfield Noun, founded the Young Women’s Resource Center. The 70-year-old Louise had already been the president of the League of Women Voters and the Iowa Civil Liberties Union, had founded the Iowa Women’s Political Caucus and the Des Moines chapter of the National Organization for Women, and had financed the landmark Supreme Court case Tinker v. Des Moines, but she looked at the city and saw an inequality that she was determined to combat.