What Would Louise Do?

When I imagine Louise Rosenfield Noun, the leader of a group of visionary women who founded the Young Women’s Resource Center (YWRC), I envision a small woman with pure white hair and a stare that could immediately put you in your place. This vision is driven by what I have read about Louise in her books and by conversations I have had with her peers and friends. My imagined vision is also driven by a small, framed photo of Louise that sits on my desk, as well as every other desk throughout the YWRC. All of these the pictures have the letters “WWLD” or the phrase “What Would Louise Do”. Part of our role at the YWRC is to keep Louise’s memory and passion alive, to continue pursuing her vision of equal rights and access to services for women and girls in our community and world. Her mission is very much alive at the YWRC. 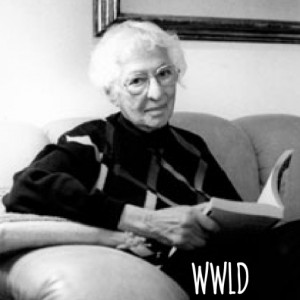 Louise was drawn to feminism in 1959 and began researching the women’s suffrage movement in Iowa. This movement was a 50 year battle, culminating in the right to vote for women in Iowa. Louise fought for women’s and civil rights until her death in 2002. Now, 14 years later, the first female presidential candidate has been nominated by a major political party. In less than 100 days, there is a possibility that the United States will have its first female president.

I can’t help but imagine what Louise’s reaction would be. She felt strongly that women should empower other women, including in the political arena. She herself fought hard in 1971 when Shirley Chisholm announced she was running for president of the United States. Louise worked as part of an Iowa committee supporting Chisholm with the goal of sending Des Moines’s Roxanne Conlin to the Democratic National Convention as a delegate. They were not successful, but that did not deter Louise.

Louise’s spirit and passion drove her to fight tirelessly to improve our world. She advocated for women’s social and legal equality and helped found philanthropic organizations, which provided or funded critical services to improve the lives of women and children. The YWRC exists because she saw a gap in services for young women involved with the juvenile justice system. As Louise herself stated, “I am proud of my part in establishing the Young Women’s Resource Center and I hope as the years go by it will not stray too far from the ideals of its feminist mothers.”

When I think about Louise today, less than a week after the presidential nomination of Secretary Clinton, I believe she would say we still have not done enough. One very large glass ceiling may be broken on November 8, 2016, but so many more still exist. Women in Iowa still only make 77 cents on the dollar compared to men for equivalent jobs. A mere 22% of the seats in the Iowa Legislature are occupied by women and our state has yet to elect a female governor.

These are all issues Louise identified in a 1975 speech she wrote for her induction into the Iowa Women’s Hall of Fame. When I ask myself “what would Louise do” in this moment, I believe her advice to us today would be the final sentences of that same speech:

“We have a lot of work ahead of us before we reach this utopia [equality]. The going will be rough, but we have no choice but to keep on struggling. Like our foremothers who fought so long and hard for the right to vote, we won’t stop until the job is done.”